Today’s feature is the awesome team of Sarah Greenlaw and Ben Iluzada who comprise BSMT Press (Basement Press). I stumbled upon their work while I was at an event at a digital print studio and I thought it was really fun and neat. Their work is simple, clean, and fun while still showing off a keen ability in both digital and traditional print. The team has an excellent dynamic as Greenlaw handles the illustration, design and digital print while Iluzada handles the traditional print processes and bookbinding. The two bring their own specialized skill sets and practices, and they’re then able to collaborate and produce a myriad of fabulous print pieces. From cats to bats, t-shirts to tote bags, and everything in between BSMT Press is making some really cool prints and products.

As a huge print nerd and cat/bat lover, I was immediately a fan of their work and had to reach out. We were able to a quick, but really fun article where they both answered every question! It’s a different read from our usual stuff but it’s a really fun one as well! We were very happy to get to work with these two awesome printmakers and this won’t be the last you’re seeing them on Plebeian! Enjoy!

1.Tell me about the beginnings of BSMT Press, how did you two come together? How did the idea of the shop develop? Where did the name come from (if I can ask)?

Sarah: We started making work together after undergrad when we were roommates living in an apartment that took up the first floor and basement of a row home in Baltimore, MD. I don’t remember the exact impetus for branding our work together, but one year we made some t-shirts to sell at MICA’s annual holiday Art Market, and they sold out so quickly that we had to print more overnight for the next day. We decided to scale up production for the summer version of Art Market, and we came up with the name “Basement Press” because we had a shared studio space in the basement, and we had a small etching press down there. When we got more serious about having an online presence, we found out that “Basement Press” was already taken, so we decided to shorten the name to "BSMT Press" rather than altogether change it.

Ben: From there, we really ended up cementing ourselves as BSMT Press by consistently almost selling out at every Art Market we vended at. Once we started seeing people wearing our t-shirts around town, and posting them on instagram, we realized that we really wouldn't be able to change the name.

2. Your shop is very much a collaboration and you both bring different elements of print together, so how does this work in the process of design? Do you each bring designs to the table and edit together? Do you work on singular images? Or does the process vary? Is your process altered at all when working for someone as opposed to just on general print production?

Sarah: The majority of our collaborative work has the labor divided into design and print - I do the design work, and Ben handles the printing, binding, and/or fabrication. We both try to treat it like we’re working with a client, albeit a client who you can be much more blunt with, if that makes sense. Since we’re partners both in making work and in the relationship sense, our workflow is much more casual together than when working with clients. Usually we’ll throw around some ideas of things that we think are funny or that people will buy, and figure out how to make the idea into an actual print or item. Sometimes it’s more a process of heavily critiquing each other’s idea. We sell work that is individually created as well as collaborative, so the binding element is working together to market and sell everything, rather than literally working together on every project.

Ben: Another thing to consider is that we generally work on one design/image at a time, before moving on to the next. That way when it actually comes time to produce items for fairs etc, we can just get to work printing, without spending time making aesthetic decisions which were hammered out during planning. Apart from things that we work on together, we both sometimes bring things we've worked on independently to the table. A good example would be the different landscape woodcuts or anti-fascist cat posters. Those were all developed independently, but have become mainstays of our booth at fairs.

3. Do you guys find that certain images work better for specific types of print and that's what you work towards? Or do you design a print and then its print or product use is developed later?

Sarah: Sometimes we do design an image with a specific use in mind, especially for screen printing. We did a bat tote a year or two ago that I very heavily designed for screen, down to mixing the ink colors. Other times, we’ll find an older image and decide to re-use it in another context.

Ben:I do want to point out that we really don't do work for other people under the guise of BSMT Press. This is primarily for the two of us to make and sell work together. When we have external clients, we generally steer them to whomever's personal practice fits the bill the best. It's just easier for us to take on client work individually without having to constantly consult the other about things a third person wants.

4. There's lots of cats in your work, it's awesome. So, what inspires the imagery of your work? Is it a reflection of your collaborative personalities or is it just whatever happens happens?

Sarah: The cat-themed work started out because it sold well (our first shirt was a cat skull that said “9 lives ain’t enough”). More recently, I’ve made a lot of cat-themed work because I volunteer at PAWS, but also because world events have been a huge bummer over the past few years, and my way of dealing with the frustration and injustice is advocating for animals. We also have a cat-son named Charlie Bean, and are obsessed with him.

Ben: Since the cat themes started from Sarah, I've been doing my best to come up with imagery/product that could speak to other people. Not that we've really made many, and the cat stuff really does work for us. We're both worried about being pigeon-holed into only make cat themed artwork though; so Sarah's been very cognizant about how much cat stuff we have available at a time. You'll notice our booth will often have a strong cat presence, but we make sure to have enough other stuff to counterbalance the feline agenda. 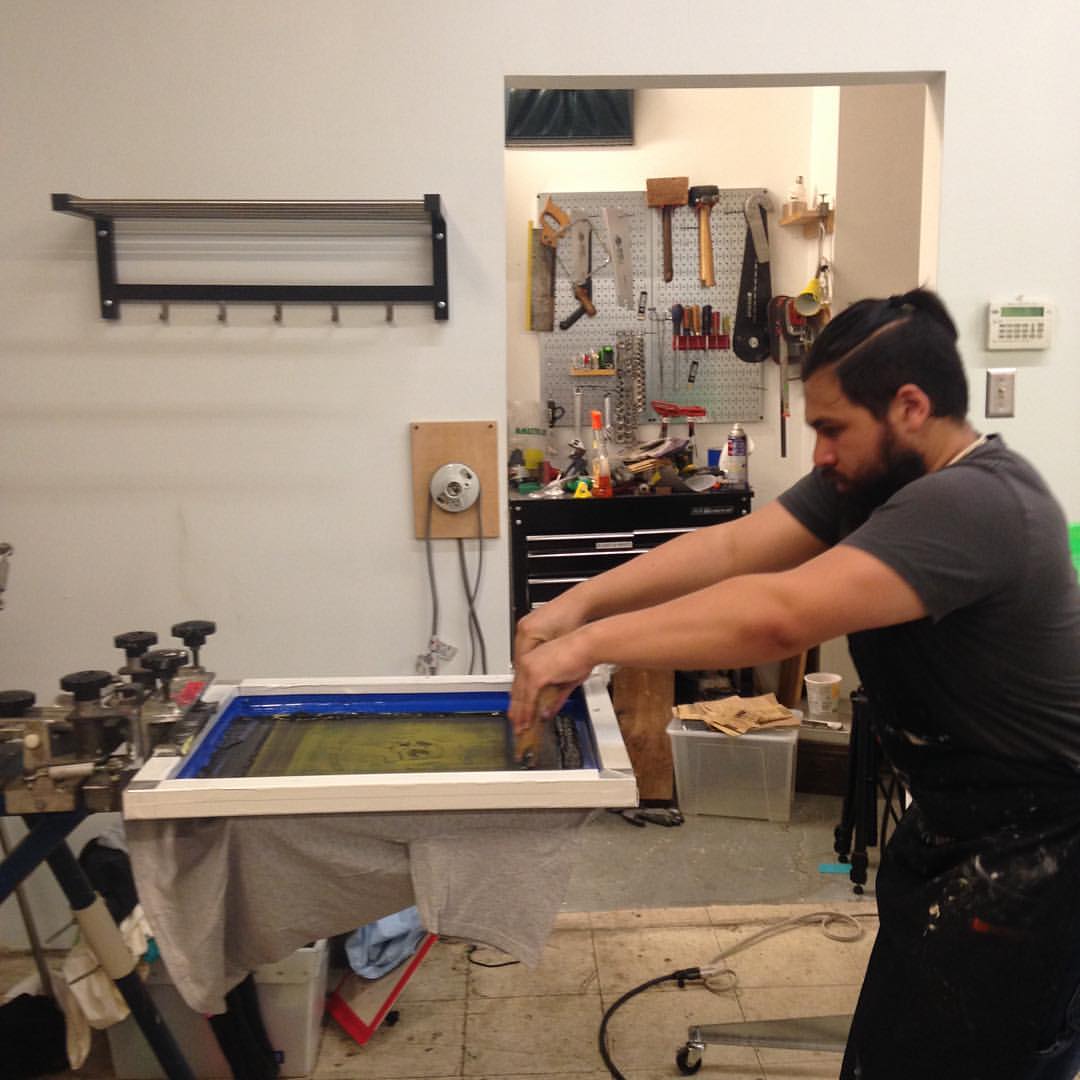 5. Your more traditional print and digital processes certainly work well in terms of production, but how do they operate in terms of a shop environment? Do you have separate work spaces or is it all one open area that you guys flow through?

Sarah: We don’t really work in the same space that often, to be honest. I do most work on my computer at home, and Ben does most print work at his shop. If we’re working together at the same time, it’s usually on something like binding booklets, or for a more complicated print job I’ll assist Ben in the studio and give direction on how the final color should look.

Ben: It's one of those cases were neither of us really enjoy having someone stand by and micromanage what we're doing while working. It's one of the reasons I don't start production of anything until after Sarah has already finished her designs, and I am 100% clear on the instructions of what to do.

6. Being a smaller shop, is a small batch nature of production something that you guys value or do you just make as many prints of one thing as you possibly can so you can get it out there? Or does that depend on the piece?

Sarah: I don’t know that we’re particularly intentional about being “small batch,” but we’re mostly limited by how much we can physically get done, as well as cost, of course. I don’t think either of us want to mass-produce anything, and personally I like retiring a design after a few runs so that I can focus on the next thing.

Ben: One thing that I always forget is that you have to store merchandise. If we were to make larger quantities of product, we would have to store more and more stuff in our house somewhere with one caveat. We're facing an issue right now where we have a lot of one t-shirt design that both of us like, but hasn't sold well (mainly because it was area specific, and we've moved away from Baltimore, MD) It's been over 2 years since we've moved from Baltimore, MD and we STILL have to lug it everywhere in the slim chance that someone might buy one. The aforementioned caveat is that traditionally printed works on paper can be stored in the flat files at my shop, and I am always down to print more linocuts when we need them.

7. You appear to be all over the Philly (and surrounding area) event scenes, how has this scene helped develop and grow your shop?

Sarah: Well we started out specifically in the Baltimore/MICA scene, so we’ve definitely shifted some things since moving to Philly. Overall Philly just has so many art fairs, there are a lot of opportunities for us to get out there and sell our work. We make a wider breadth of things now, I think, whereas in Baltimore we were heavily focused on apparel.

Ben: Us being present at fairs here in Philly is a very recent thing. We moved to Philly so I could go to graduate school which I just finished in May, 2019. Since then, we've been making up for 2 years of decreased BSMT Press activity and trying to get our foot in the door with the various vendor communities and fair planners. Hopefully you'll be seeing more of us in the future!

Sarah: Our online store is bsmtpress.storenvy.com, and we’ll be at the KCFC/Fireball Weirdo Winter Wonderland this December.

Ben: We're also on Facebook at https://www.facebook.com/bsmtpress, and on instagram at: @bsmtpress; You can also keep track of Sarah and I respectively at @lawless_greens and @2.Step.Press